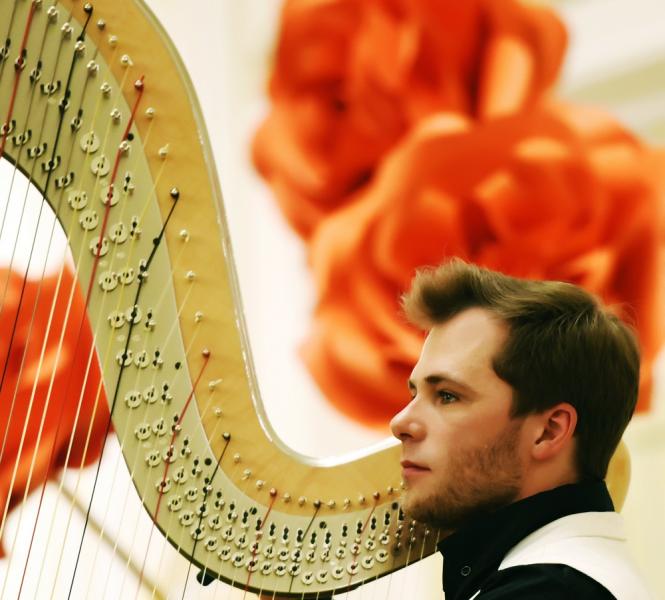 NEW AUDIENCES: Alexander has been heralded for building new audiences for classical music events due to his virtuosity, repertoire and accessibility along with his work on the electric Delta Harp.

ACCOLADES: Alexander has received awards from over 10 international competitions and was awarded a Prize for Culture from the European Cultural Foundation, Pro Europa. His discography includes two solo albums and several chamber music albums, in addition to crossover music videos. As a composer, he has transcribed over 150 compositions for the harp and has written 30 original works, including three for harp and orchestra.

EARLY YEARS IN RUSSIA:
Alexander was born in St. Petersburg, in the family of a professor of St. Petersburg Conservatory Irina Sharapova and philosopher-futurist Alexander Boldachev. He began studying on the piano at the age of four, and at the age of five he was already performing at the the scene with the first solo Harp pieces. From the age of six Sasha began to expand the repertoire with his own works, which attracted an interest to the young harpist and such composers as Sergei Slonimsky, Alexander Radvilovich, Igor Rogalev and Gennady Belov wrote for a young musician works dedicated to him.

After an admission at the age of seven to the special musical lyceum of the St. Petersburg Conservatory in harp class (Karina Maleeva) and composition (Svetlana Lavrova), Sasha became a participant in the programs of the Petersburg and Moscow Houses of Music, the laureate of the Spivakov and Temirkanov Foundation, takes part in the festivals "Musical Olympus", "New Names", "Mozart Festival", "Young performers of Russia ","Generation Next". He also performs with the orchestra for leadership of Yuri Temirkanov, Sergei Roldugin, Alim Shakhmametyev and others outstanding conductors. Becomes the laureate of the first competition named after Vera Dulova in Moscow.

INTERNATIONAL CAREER:
At the age of eight, after the performance of the Handel's Concerto with the State Orchestra of Lithuania, Sasha begins his international career. He becomes permanent participant of the World Harp Congress, laureate of more than ten contests in France, Belgium, Bulgaria, the holder of awards in the field of culture, among which are: "British brilliant talents" (for the first time the prize was not awarded citizen of Great Britain), "ProEuropa" (for outstanding artistic talent and cultural achievements) He takes masterclasses from the masters of the harp art: Xavier de Maistre, Jana Bou?kov?, Anna Makarova, Marielle Nordman, Isabelle Moretti, Natalia Shameeva, EIlisabeth Fontan-Binoche, Susann McDonald, Marie-Pierre Langlam?, Isabel Perra. He beginns his studies at the Zurich’s Academy of Arts (Professor Harp class Catherine Michelle and Sarah O'Brien, compositions by Felix Prophos and Matias Steinauer and conducting - Mark Kissochi), having received Bachelor's degrees, Master and Specialist

COMPOSER ACTIVITY:
The main compositional activity of Alexander is concentrated on expansion of the harp repertoire with his own works and transpositions for the harp, some of which (Fantasy "Scheherazade" on the symphonic suite Rimsky-Korsakov, the arrangement of "The First Suite" by Rachmaninov for harp and piano) are among the most virtuosic examples of harp literature in the world. In the opinion of leading professors Alexander already at such a young age expanded the technical and expressive capabilities of the instrument. In 2015 he published the first compositions for harp and orchestra , and in 2016 happened the Premiere of Kirill Serebrennikov's theatre piece "A Poem Without a Hero", in which Alexander took part as a music director, composer and performer. In 2017, on the historical stage of the Bolshoi Theater of Russia and on the stage of the Great Hall of Moscow Conservatory took place the premiere of the mystical opus "Verbum" for harp, choir, organ and the actor on the story of Vladimir Nabokov and the biblical texts. Also Alexander is writing and producing the songs in a modern style, working with Improvisations, creating the Music for short films and clips.

2018-2019 highlights include: 20 countries in 2018, January 2019 China Tour, Opening Ceremonies of FIFA World Cup, Moscow, Bolshoi Ballet, New Recording Release coming in 2019 “All Chopin!”, featured performance in Budapest, Paris, London, Shanghai, Beijing, Moscow and now booking into the USA.
In Alexander’s discography are several solo and chamber albums. Of the recently released: "Harp as an Orchestra" (famous orchestral melodies of the Great composers) and "From Russia with Harp" (an anthology of Sasha’s transcriptions of the music by 15 Russian composers from Alyabyev to Slonimsky). In 2015, as part of the self created group "Game of Tones", he became a laureate of the Swiss television award "Prix Walo". Alexander has very intense concert activity, having visited with solo tours and master classes more than 45 countries on 5 continents, performing with orchestras and different musicians in a chamber ensembles. In the Bolshoi Theater of Russia as a guest soloist Alexander is taking part in significant premiere productions, under the management of maestro Tugan Sokhiev. In 2017 took an active part in the Premiere of the ballet "Nureyev" performing two stage harp numbers in a duet with the stars of the ballet. In 2016 he became a member of the jury of competitions organized by the American Harp community, in Russia is a member of the jury of the contest "Nota Bene".
Since 2017 is the Official Artist of Salvi Harps, representing not only classical models of harps, but also modern, electro-acoustic instruments.