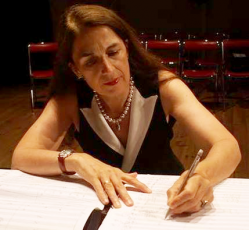 "Her music brings a new and very original style. She is in the tradition of the great French musicians" Rheinist Post
"A composer whose music would readily be that of a modern-day Debussy" Le Nouvel Observateur
"A strong and colourful universe" Marc Vignal, musicologist and critic, Le Monde de la Musique
"A playing entirely dominated by a taste for the beautiful piano" Diapason, Jean-Yves Bras
"She benefited from F. Choveaux's profound playing, which revealed a hitherto undemonstrated expressiveness and a rare ability to communicate pathos" Los Angeles Times

Françoise Choveaux revives a musical tradition that goes back to the 19th century. She is a composer but also a pianist. She plays her own works (which others also play, of course) but also the works of composers she loves. Each score is inspired either by travels, or by inner emotions, or directly linked to a literary or pictorial work.
Composer: the essential facts

From March 1999 to March 2001, she was invited by the association Pour que l'esprit vive to the Abbaye de la Prée (Académie musicale des Beaux-Arts) as Pianist and Composer for a creative residency: she drew strength and vitality from it. Among the French composers resident at La Prée are Nicolas Bacri, Jean-Louis Florentz, Thierry Lancino...

Since 2002, she has begun an important cycle devoted to the orchestra. Firstly, by continuing her series of three symphonies for strings which are now well known and performed by several orchestras (St Petersburg Orchestra, Sao Paulo Symphony Orchestra, Orchestre de la Prée...).

Secondly, by writing a series of concerti: on 21 September 2002, the Lithuanian Philharmonic Orchestra premiered his Violin Concerto No. 1 with the prodigy Vilhelmas Cepinskis in a series of concerts in the main cities of Lithuania (21 September 2002).
A year earlier, the Musiciens de La Prée orchestra had premiered the Symphonie blanche for organ, string orchestra and timpani (op. 100) at Notre-Dame-de-Paris during a mass in honour of Armand Marquiset.

Since 2001, her Indigo Symphony has been included in the repertoire of orchestras (St Petersburg Orchestra, Sao Paulo Symphony Orchestra). In June 2004, she premiered her Winter Concerto for piano and string orchestra with the London Primavera Orchestra.
Since then, she has performed it again with the Baden-Baden Philharmonic, in Russia with the St Petersburg Chamber Orchestra, at the Rencontres Musicales Internationales d'Aix-en-Provence (concerts in Aix and Marseille)...

Today, she has written more than 280 opuses for all instruments and all formations: from solo to symphony orchestra. And her compositions (orchestral, chamber music) are played in Europe (France, Italy, Spain, Croatia, England, Portugal, Germany, Russia, Belgium, Baltic States...), in Asia and in America.

Trained at the Lille Conservatory, the Ecole Normale de Paris, the Peabody Institute in Baltimore and the Juilliard School in New York, she has performed in prestigious festivals in France, Europe, Asia, the United States and Brazil.

As a pianist, she has established herself as a privileged interpreter of French music: the international and specialised press has acclaimed her world premiere recording of the complete works for piano by Darius Milhaud (10 de répertoire, 5 Diapasons).

In 2008, she wrote the original music for the first episode of the documentary "Louvre-Lens" written by Bruno Vouters, directed by Pascal Goethals and produced by Les films du Tambour de soie. She has just recorded the music for the 2nd episode which will be broadcast in 2012.

She also likes to mix arts by creating shows or scores: writing a musical tale for children recorded by Michel Bouquet, collaboration with the choreographer Odile Duboc, writing compositions for museums (France, Iceland), editing a show on the theme of insects with the painter Matthieu Schmitt, writing a music for a radio serial produced by Radio France.