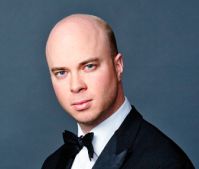 Presentation Christian Chamorel
Pianist Christian Chamorel, born in Lausanne in 1979, is remarkable for the diversity of his repertoire and his exacting artistic approach.
He has been invited to play at major festivals, including the Beethoven Festival of Chicago, the Festspiele Mecklenburg-Vorpommern and Klavierfestival Ruhr in Germany, as well as French festivals such as Les Musicales du Golfe, Lisztomanias and Festival de Musique de Menton. His performances include concerts at the Musashino Hall, Tokyo, the Konzerthaus in Berlin, Munich’s Prinzregententheater, the Tonhalle in Zurich, the Wigmore Hall in London and the Victoria Hall in Geneva. He plays with orchestras including the Orchestre de Chambre Fribourgeois, the Berner Symphonieorchester, the Berliner Camerata, the Camerata de Lausanne and the Sinfonietta de Genève, among many others.

Chamorel began studying the piano at the Lausanne Conservatory, obtaining a soloist diploma with distinction in Christian Favre’s class at the age of 17. He furthered his training under Gerhard Oppitz at the Munich Hochschule für Musik und Theater, where he obtained another soloist diploma in 2004 before continuing at the Zurich Musikhochschule under Homero Francesch.

Chamorel is equally at ease playing a highly virtuoso solo repertoire, as is attested by his critically acclaimed recordings of Liszt, Mendelssohn and Schumann, as in intimate chamber music and lieder, which he studied under Helmut Deutsch in Munich. He strives to facilitate the interchange between genres, and with this objective has founded a festival of lied and chamber music at Mont-sur-Lausanne, Switzerland, the Mont Musical, whose focus immediately won over an enthusiastic following.

Chamorel also accompanies many internationally renowned instrumentalists and singers such as French violinist Pierre Amoyal or Swiss mezzo-soprano Marie-Claude Chappuis. He is the partner of choice of Swiss violinist Rachel Kolly d’Alba.
An all-round musician and thorough perfectionist, Christian Chamorel is one of Switzerland’s most widely fêted pianists of his generation as a prize-winner of many international competitions, including the Gian Battista Viotti in Vercelli, the Premio Iturbi in Valencia, the Beethoven in Vienna, the Konzertgesellschaft in Munich and the Société des Arts of Geneva. He has also been awarded many Swiss prizes including the Yamaha, the Leenaards Foundation and Kiefer Hablitzel prizes, as well as the first prize for Virtuoso of the Future at the international competition in Crans-Montana.
flagname
Tweets by @BSArtistManagmt