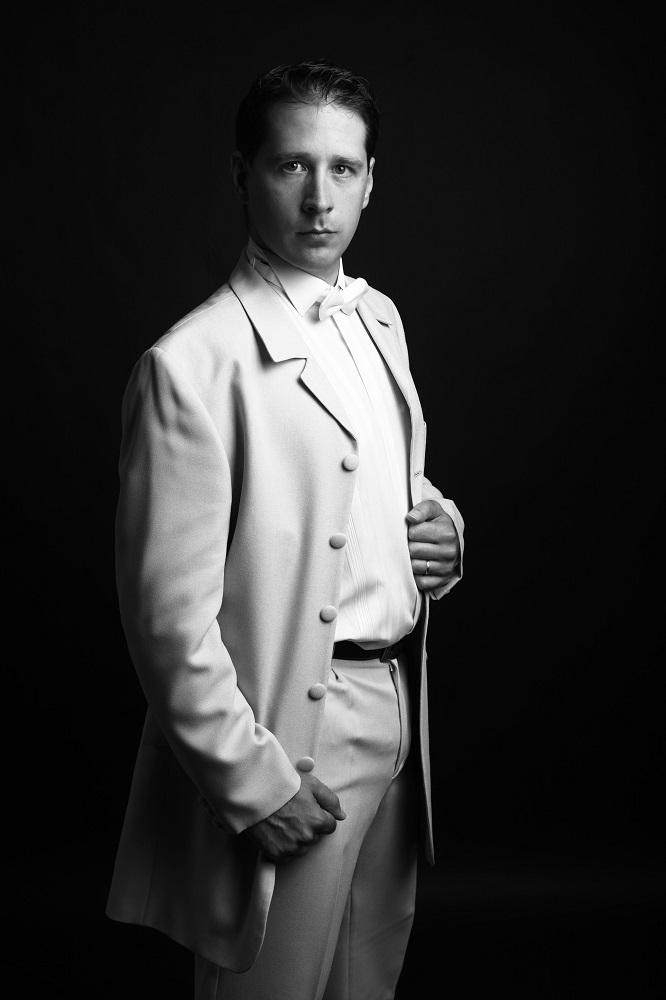 His sound production is rich and elegant. His sensitivity is intense and quite remarkable. Cyril Guillotin is an unusual pianist. Some will call him a poet for his performances as so many of his interpretations are an invitation to dream.
Distinguished musicians remarked upon this ability very early and this led him to make his debut at 11 years old : prizes in such competitions as “Steinway & Sons” and “Léopold Bellan”, 1st recital in Prague during the European Mozart Festival (with the help of Jacques TADDEÏ, then Director of the National Conservatory of Paris), then in main concert halls in Paris (Salle Pleyel, Maison de Radio-france) and in Museums (Musée Carnavalet) with TV appearances on Canal J and TF1.
He then studied at the National Music Conservatory of Paris with Chantal FRAYSSE then 0livier GARDON, Emmanuel MERCIER and Billy EIDI until he passed his final exams at regional level. The following year Jacques TADDEÏ asked him to play in the Châtelet Theâtre together with another young and talented french pianist, Romain DESCHARMES.
He then entered the Superior National Conservatory of Paris (CNSM) where he studied with Brigitte ENGERER, a great specialist in Russian music, who had as his first teacher the hungarian pianist Gabriella TORMA. He graduated in piano with a First Prize with Honours as well as Chamber Music and Conducting abd congratulations from Yvonne LORIOT- MESSIAEN. The same year he also won the 1st Prize in Virtuosity at the “International Piano Competition” in Arcachon.
He then gave concerts in France (Salle Pleyel, Maison de Radio-France, Théâtre de la Ville-Paris). as well as abroad (Germany, Austria, Japan), as a solist (“Festival Chopin-Paris”, “Festival Jeunes Talent-Paris”, “Festaival Radio France-Montpellier”, “Journées Lyriques-Chartres”), or in chamber music with celebrated artists and composers (Viorica CORTEZ and Shigeko HATA – Soprano, Pierre VAELLO - Tenor, Jean FERRANDIS - flute, Fabrice MORETTI – Saxophone, Nicolas STAVY ans Nima SARKECHIK – Piano, Quatuor Parisii, Quatuor de Chartres, National Orchestra of Ile de France, UNESCO, Orchestra of Picardie, Pascal VEROT – Conductor, Laurent LEFRANÇOIS – composer who dedicated to Cyril Guillotin a piano triptych, 'Les Visages” (Faces) that Cyril Guillotin played for the first time in 2007 during the Festival Montpellier Radio-France). Meanwhile, he went on studying with the major Russian masters (Michael VOSKRESSENSKY, Dimitri BASHKIROV), and also Pierre-Laurent AIMARD, Pacal DEVOYON, Jacques ROUVIER, John O'CONNOR or Dominique MERLET for four years before meeting the great maestro Aldo CICCOLINI who became his teacher - A relationship with both wisdom and humility on both sides .
In 2007, he was subject to a violent assault and this kept him away from the keyboard for more than 8 months and from the stage for more than 2 years. This painful experience resulted in a greater depth in his playing, a new vision of his position as an artist and in life. He passed pedagogic exams and created the association “Les Amis des Classiques Buissonnières” to bring music where it is not expected to new audiences, with new artistic concepts such or the creation of a musical tale” L'Autre Reflet” . He also got involved in the management of a local Conservatory of music in the Parisian suburbs.
Beginning step by step a return to concert performances he marks his true recording renaissance by deciding to record his first disc “Sortilèges” (Magical Spells) one year after the premature death of Brigitte ENGERER.
This record with a strong Russian touch as a tribute won critical and other pianist acclaim, received the prestigious “Choix de France Musique”.

His last CD “HELLDUNKEL-Clair Obscur” (2016-Evidence Classics), on new and hold pianos, received most great honors of the french and internationla press.

Cyril Guillotin is presently teaching piano and chamber music in the Departemental Conservatory of the Grand Narbonne (South of France).