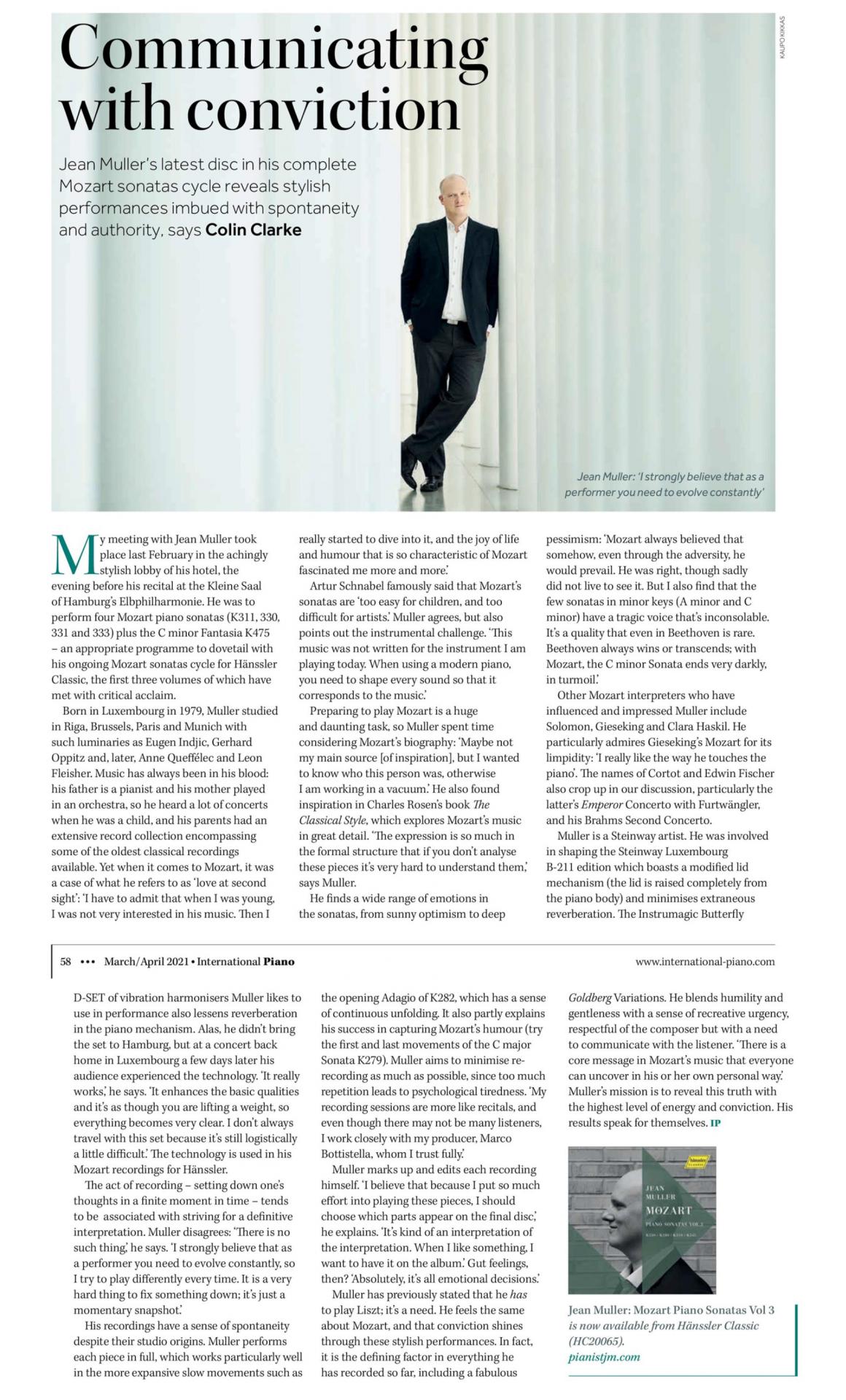 CLASSIQUENEWS.COM
Interview with Jean Muller, piano. For his 2nd volume of Mozart’s Sonatas, edited by Hanssler (February of 2020) Read the article HERE

idFM
Vivaldi by Ophelie Gaillaird and the Pulcinella Orchestra, the second volume of the sonatas by Mozart played by pianist Jean Muller, Brahms from the clarinettist Florent Héau, celloist Jerome Pernoo, pianist Jerome Ducros and the Quatuor Voce, Richard Strauss by soprano Diana Damrau and Mariss Jansons at the stand of the Bavarian Radio Orchestra Listen in full HERE

After a first opus which came out last year, here is the second part of the sonatas for piano by Mozart interpreted by Jean Muller. This time, the choice was made to play the Sonatas K311 (in D major), K282 (C minor), K279 (C major) and K284 (D major)... Read the article HERE

France Musique
"On today’s menu: a selection of virtuoso Baroque works by Dmitry Sinkovsky and the ensemble II Pomo d’Oro, chamber music pieces from Beethoven and Schubert by the Il Tetraone ensemble, the second volume of the Sonatas for piano of Mozart by Jean Muller…" Listen in full HERE

MUSICWEB : Michael Cookson "A rewarding album from Jean Muller splendidly played and recorded which bodes well for subsequent volumes in the cycle on Hänssler Classic." Read the article HERE

" If future installments rise to the same level as this first one, Jean Muller's complete cycle of Mozart's piano sonatas will be a notable event and a gift to lovers of this music. The Luxembourg pianist is in a fortunate position-he has well-considered ideas about Mozart's intentions and the technique to carry them out. The most prominent idea, as expressed in Muller's articulate program notes, is that Mozart was a complete person. This is actually a novel perspective. Mostly we carry around in our heads snapshots of Mozart the precious child prodigy, the put-upon church composer, the working musician in Vienna lauded one day and ignored by fashion the next. Finally there is the pathetic snapshot off the dying Mozart singing an air from The Magic Flute with tears streaming down his cheeks.

It's not that we tend to make him too dainty and charming-although that happens, also-but that the true stature of Mozart's imagination remains under-appreciated. It was Shakespearean and nothing less, which jars against the silly image in Amadeus of a giggling semi-idiot thrilled to snatch cakes off the table at a party. Muller speaks of Mozart as he should be spoken of, a genius of superhuman range, complex technical understanding, ceaseless creativity, and deep sympathy for the human condition.

How do you accept such a titanic conception and translate it into the constrained form of the 18th-century piano sonata? As a form, the sonata was quickly evolving in Mozart's Vienna from late Baroque to Rococo, early Classical, and mature Classical. On the present disc one hears this evolution in motion. Sonata No. 3, K 281 is concise, ornamental, and formally stiff when it shows elements of the late Baroque, while Sonata No. 12, K 332 begins like a day at the fair, full of panache, free expression, and anything goes. In technical terms Mozart's ability to freely express his imagination without breaking out of the constraints of the sonata form also reminds me of Shakespeare-Hamlet should be a generic bloody, pile-up-the-corpses revenge play like Kyd's Spanish Tragedy, but its main character happens to be a modern person panicked by the notion that he is trapped in a revenge tragedy.

Likewise, Mozart is the protagonist of his piano sonatas, not trapped in them but knowing full well that he had to write music for connoisseurs that would also appeal to general listeners (Muller quotes a letter to this effect). Maybe it's the lace-cuff little man we see in our heads that keeps us from appreciating the incredible difficulties Mozart set for himself solely so that he could solve them in brilliant fashion (he knew the average listener would never guess what was happening). Muller points to a shining example in the evergreen Sonata No. 11 "Alla Turca," where none of the three movements is actually in sonata form.

The first movement is a very long set of variations on a theme that isn't really suited for extended variation, because it has a narrow compass of notes and keeps landing back on the tonic. (There's a similarly unpromising theme in the middle movement of Beethoven's "Appassionata" Sonata, which most pianists cannot bring to life.) Having set himself the challenge of holding our attention for 13 minutes-around the length of a whole early sonata-Mozart ties the other hand behind his back by not escaping off into the stratosphere with far-out variations. Quite the opposite-he keeps the theme squarely in view all the time, and yet through accidentals, ornaments, changes inside the meter, filling in intervals, subdividing the beat, and other small sleights of hand, the movement unfolds delightfully, like an inch worm that turns into a butterfly.

The latest sonata on the program. No. 17, tells us from its catalog numbering, K 570, that all but one of the piano concertos is behind us, which accounts for why the greatly enriched first movement sounds for all the world as if an orchestra should be in the background. The slow movement is so plain, however, it could be a Lutheran chorale, if you can imagine a sunny Lutheran chorale, while the finale is something only Mozart could create, a frolicking Rondo that makes you want to laugh and cry at the same time, rather like Cherubino's lovesick funny arias.

Muller gives us a lot to think about in his notes and beautifully carries them out in practice. This alone makes for an exemplary Mozart recital, and it's no surprise that he is a professor of music at the Luxembourg conservatory or that he regularly performs a complete Mozart sonata cycle. What pleased me most was the pianist's emphasis on humor, wit, melancholy, drama, and contrasting moods. He is attempting to communicate Mozart as a complete person, the very thing every performer should be doing. It's notable that Muller points to the frequent mismatch between the modern concert grand piano and the much more modest reach of the keyboards in Mozart's day. As a result, he says, pianists feel that they must restrain themselves, deliberately not taking advantage of a modern piano's huge capacity.

With Muller one feels no such restraint, yet he doesn't exaggerate the music's dynamic range, never over-pedals, and resists the temptation to add extra expressive touches not indicated on the page (quite often very little expression is indicated on the page). It's a real feat to sound as imaginative-and frankly entertaining-as Muller does within these constraints. But finding freedom within boundaries is what Mozart's entire career was about, so it's fair to say that Muller has found the right chemistry to bring these sonatas to life." Huntley Dent, Fanfare

"The performances were superb. Mr. Muller displayed the range of an orchestra, and one could almost recycle Heinrich Heine’s own comment about Liszt, that “the piano disappeared and the music alone was revealed”

All in all, it was an outstanding triumph." Rorianne Schrade, New York Concert Review

"From the start this was everything you’d expect from a Liszt recital. Simply staggering. Jean Muller imbued it all with his very special brand of magic. Scooping you up, whirling you around the cerebral dance floor in quick successions of triple eighths. A double whammy of jaw dropping and breath taking. Superlatives exhausted.

6-stars-out-of-5 for performance and CD. If the gods are with us, Jean Muller will grace our fair city again. And soon." Martin Slidel, What’s on London